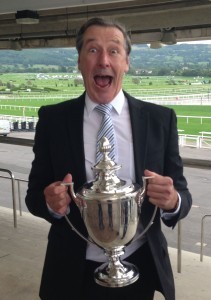 Ian Stewart began playing trombone at school when he was 11. He joined West Wycombe Band and the Oxford and District Youth Band. He was also a member of the National Youth Brass Band of Great Britain and a Junior Exhibitioner at the Guildhall.  Ian has been a member of Horsham Borough Band is currently a member of Friary Brass Band, giving many years of membership to each. Ian will now dep on a range on instruments from baritone to bass, plays in a trombone ensemble, pit bands and orchestras.

After school, Ian spent 22 years in the army music service, first as a bandsman in the 2nd Battalion, the Royal Green Jackets. In 1985, he completed the army Bandmaster’s course and was appointed Bandmaster to the Queen’s Own Hussars. His final appointment was as School Bandmaster at Kneller Hall, the home of the British Army School of Music.

Ian became Musical Director of LGB Brass in 1999. Thanks to Ian, LGB Brass has celebrated both concert and competition success. He has conducted the band on concert tours to France, Germany and Hungary as well as all our regular venues such as Eastbourne Bandstand, Proms in the Paddock and several occasions at Lewes Town Hall.

In 2006, Ian took the band to 2nd place at the Southern Counties Regional competition. This was our first attempt at a competition at this level and meant we qualified for the National Brass Band Finals at Harrogate in September. From there on in, the band entered something of a golden age under Ian’s leadership – qualifying for the National Brass Band Finals (now relocated to Cheltenham) three times in four years (2010 and 2011 – 4th section) and 2013 (3rd section). On 22nd September 2013 LGB Brass were crowned Third Section National Champions of Great Britain. After consolidating their promotion to the 2nd section, LGB went back to the National Finals in Cheltenham once again in 2018 after winning the London and Southern Counties 2nd Section title.

In his spare time, Ian likes trains and plays trombone.