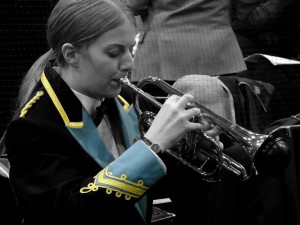 Christina joined LGB Brass in 2009, where she has played cornet on the front row, followed by a brief stint on soprano, and most recently principal cornet (any excuse to be bossy!). She is married to Adam Kearley, a former LGB cornet player, and enjoys collecting pretty scarves, early-morning cornet practice, and occasional 5k runs.