LGB Brass is an active and popular band based in Lewes, the county town of East Sussex.

We have around 50 members from across East and West Sussex, attracted by the band’s friendly atmosphere and high standard of music. As well as the main band, we have an training band of young learners who are preparing to move into the main band.

We have a large and varied repertoire. At our concerts, you will hear traditional marches, music from film and stage, virtuoso solo items and the best from the modern brass repertoire.

We usually rehearse on Thursday evenings at the All Saints Arts Centre. Friars Walk, Lewes. The training band rehearsal is from 7pm-8pm. The full band meets from 8pm-10pm. For more details, email  secretary@lgbbrass.co.uk

We also have a group for young beginners, which meets on Thursday evenings at the All Saints Arts Centre from 7-7.45pm. For more details, email secretary@lgbbrass.co.uk

LGB Brass is always looking for experienced players. We can offer good-quality instruments. There is also support for players returning to brass music.

LGB Brass regularly takes part in competitions. We qualified for the finals of the National Brass Band Championships in 2006, 2010, 2011, and were crowned National Third Section Champions at the event in 2013.

We’re a sociable bunch: pub club after band on Thursday, regular social events and nights out with lots of band camaraderie. In 2014 we visited Lewes’ twin town of Waldshut in Germany. We have also taken part in the Whit Friday Marches and organise quiz nights, team dinners and nights out. 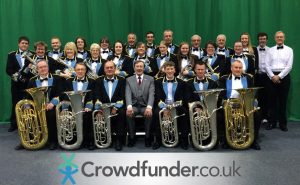